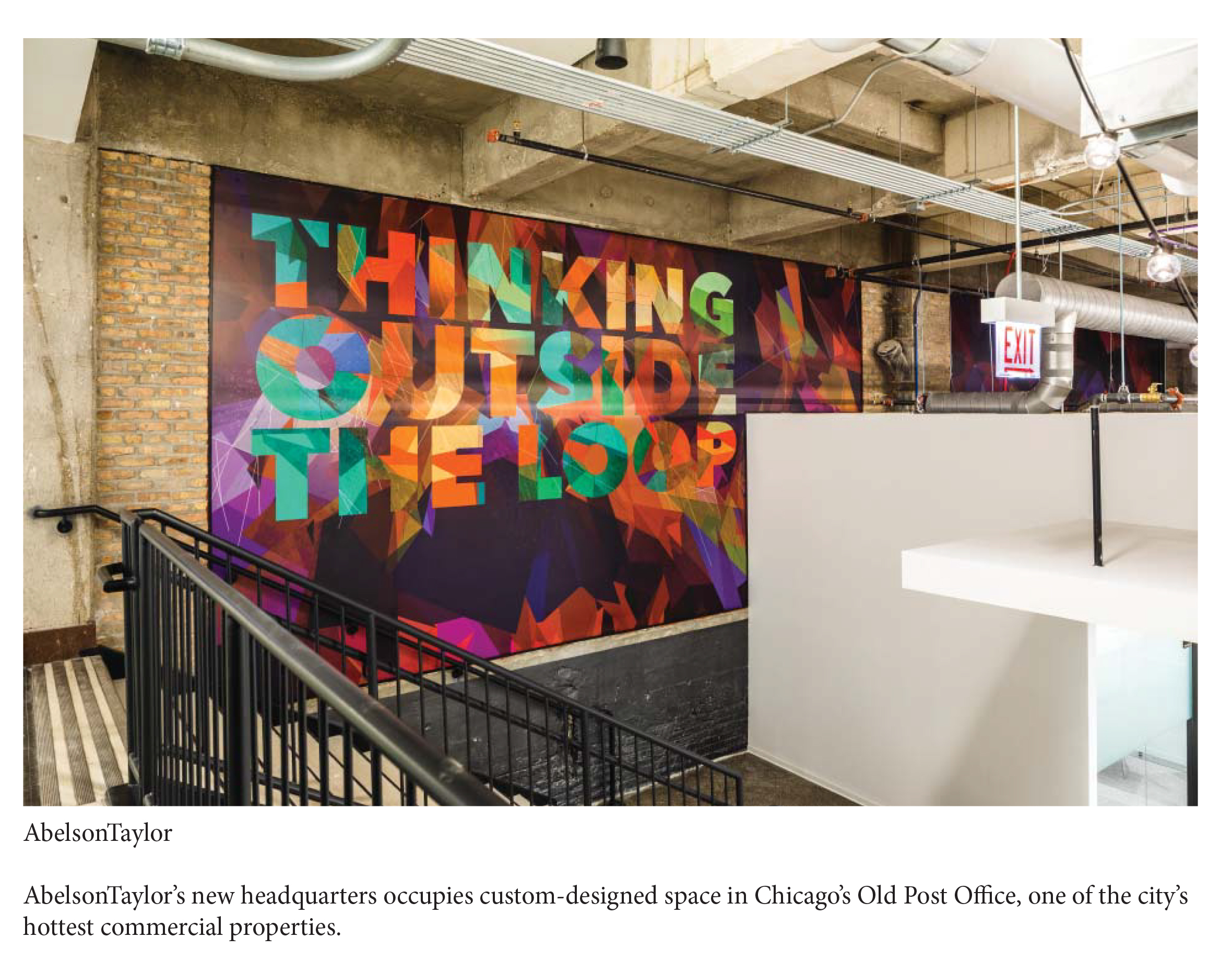 This bold mural, designed by AbelsonTaylor staff, is part of the reimagined space in the historic Old Post Office.   Courtesy AbelsonTaylor

“Thinking Outside the Loop,” says a mural in AbelsonTaylor’s new headquarters in Chicago.

Those four words sum up the bold vision evident throughout the 80,000-square-foot space. It’s postmodern in a post office. Yes, post office.

AbelsonTaylor, among the world’s most renowned health and wellness advertising agencies, is now getting its mail at Chicago’s Old Post Office, 433 W. Van Buren St. The Art Deco building, vacated in the late 20th century, has now delivered a new destiny as a home to several businesses.

There is a great deal of space, which provides room for growth. That was a key reason AbelsonTaylor selected it, says Dale Taylor, the CEO who founded the agency.

“You not only have to adapt to change, you have to plan for it,” Taylor said. “With changes in the size and composition of our agency and the way we work, we needed a more open, collaborative environment and the ability to grow and change in place. Our new workplace gives us that. It’s dynamic, expansive, and brings us together in dozens of inspiring spaces to collaborate on the more than 50 healthcare brands we serve.”

The post office was built in 1921, but it grew during an expansion completed in 1932, rising to nine stories. It was tremendously busy, serving Chicago people and businesses, including mail-order titans Montgomery Ward and Sears.

Modern challenges meant the classic building was no longer properly designed for postal use, and it closed in 1997. It was listed on the National Register of Historic Places in 2001 and seemed just that, history.

But a bold new vision was realized when it was redeveloped and business tenants made it their own. AbelsonTaylor President Jeff Berg said the space will give employees options where to locate, work and create.

“Everyone has a dedicated workspace, but no one is confined to working there. If you need a quiet place to write something highly clinical, maybe you choose one of our 27 focus rooms,” Berg said. “If you want to work somewhere lively, maybe you choose one of our five open collaboration spaces, 19 conference rooms, or 17 flex rooms. Or, if coffee is what fuels your creativity, you can always set up shop in one of our two large cafes. The number and variety of spaces give us unprecedented workstyle freedom.”

Berg told the Illinois Business Daily that the decision to relocate to the Old Post Office was made carefully — but it did dazzle them from their first glimpse of its new look.

“As you would expect from an organization making such a major investment, we looked at a very large number of properties, and then narrowed it to four, all of which would have met our needs,” he said Wednesday. “But even from the very first meeting, the allure of what the Old Post Office will become made it the front-runner for our agency.”

The Old Post Office was purchased in 2016 by 601W Companies of New York, which teamed with Gensler, a famed design and architectural firm to re-create the building at a cost of $800 million.

They added a bar, complete with pool table and bocce court, a lounge, a library, and a fitness center that includes a boxing ring to work up a sweat and reduce tensions. A rooftop deck nearing completion will have a running track, basketball courts, and green space. More additions and amenities are planned.

“I’m not sure we’ve gotten to the coolest thing yet,” Berg said. “Chicago in summertime brings out so many opportunities. However, at the moment, the best thing is that being on a single floor of space means you see most everyone! And that is truly a delight.”

This creative rebirth of the famed downtown structure has attracted high-profile tenants such as Uber, PepsiCo, Walgreens and more.

AbelsonTaylor, which occupies the sixth floor of the north building and a section of the south building, was the fourth company to make it their new creative home.

National architecture and engineering firm Harley Ellis Devereaux (HED) designed the space. Lead designer Olivia Danielson-Veed said the goal was to connect the team and provide a strong, vibrant feel. Several bright, eye-catching murals, including the one urging staff to always be “Thinking Outside the Loop,” were created by employees Colin Craig, Rich How, and Eric Pernod.

“Our goal was to promote a strong sense of community and brand presence while providing multiple opportunities for interaction and collaboration,” Danielson-Veed said.

“What’s really inspiring the team is the amazing workplace designed by HED Design,” Berg told Illinois Business Daily. “We wanted a place where we could collaborate and really feel the energy created by our peers, and the Alley, a series of team and meeting rooms all centrally located within the space, really does that.”

It’s a bold approach, but there was an appreciation of the history that occurred in the nearly century-old building.

Restored green and black floor tile is at the company’s entrance and a pair of focus rooms were once postal vaults where valuable items were temporarily stored.

Now, valuable ideas will be formed there

Want to get notified whenever we write about Abelson Taylor, Inc ?

Sign-up Next time we write about Abelson Taylor, Inc, we'll email you a link to the story. You may edit your settings or unsubscribe at any time.